The International Development Association (IDA) – of the World Bank – has agreed to provide Rs. 2.90 billion credit assistance to the government.
Finance secretary Shanta Raj Subedi and World Bank country manager for Nepal Tahseen Sayed signed the agreement at the Finance Ministry here today.
Tahseen, on the occasion, appraised Nepal Rastra Bank (NRB) for reform of financial sector and lauded government’s role in maintaining financial discipline as well as establishment of Department of Money Laundering according to the country’s international commitment.
The loan assistance is to avail budgetary support to the government to help to carry financial sector development reform programmes that was started in mid-2011.
The central bank has initiated financial inclusion and financial literacy programme in consultation and cooperation with stakeholders under the programme.
Likewise, the restructuring of two major state-controlled banks – Nepal Bank Ltd (NBL) and Rastriya Banijya Bank (RBB) – has also been the major component of the reform programme.
Posted by Kuvera Chalise at 11:11 PM No comments:

Rupee dips to historic low of 97.73 against US dollar


The Nepali rupee dipped to a historic low vis-à-vis the US dollar as the central bank fixed a reference exchange rate at Rs 97.73 per US dollar for tomorrow, due to weakening Indian rupee, with which it is pegged at.
The Indian rupee has been depreciating against the green back since lkast few months and the Reserve Bank of India has also been trying to stabilise it, but without any immediate results.
Today, the Indian rupee dropped by 73 paisa to 61.20 against the US dollar making Nepal rupee to dip at Rs 96.69 against a US dollar.
Earlier, Nepali rupee had dipped to Rs 97.69 per US dollar in the first week of July.
The freefall of Nepali rupee against the US dollar has already been making imported goods from third countries and raw materials including imports from India against the US dollar more expensive.
Most of the importers have stopped opening the Letter of Credit (LC) fearing the hike in price of imports.
But the remittance inflow – that is expected to surpass the budget of Rs 404.82 billion of the last fiscal year 2012-13 – for the last fiscal year itself will see rise due to expensive US dollar.
Some of the economists still expecting the US dollar to be as expensive as Rs 100, following the current market trend.
Posted by Kuvera Chalise at 10:42 PM No comments:


Number of child labourers has decreased to 1.6 million in the country, according to the United Nations Children’s Fund that was earlier United Nations International Children’s Emergency Fund.
However, the abolition of child labour in the country seems still far away, said commissioner of National Human Rights Commission Gauri Pradhan addressing a launching campaign of UNICEF to end violence against women and children, on the occasion of global campaign to eliminate violence against children here today.
The data revealed drop in number of child labour in the country, he said, adding that the UNICEF has been helping Nepal in the drive against elimination of violence against children.
Pradhan also lauded various organisations for their role in fighting against the violence against the women and child. “Nepal has also been recognised internationally for its contribution like Shakti Samuha – an organisation founded by trafficked women – has recently bagged prestigious Magsaysay award.
There are around 1.6 million children aged between five and 17 work in various factories, while more than 600,000 are engaged in hazardous works, informed UNICEF Nepal's representative Hanaa Singer, on the occasion.
The number of girls and women working in the night entertainment industry in the capital is estimated between 11,000 and 13,000, she said, adding that there is a need to make children aware of their rights and inform violence against them and help make the invisible visible as large number of violence has not been reported because it happens inside of the homes.
Some 34 per cent of women aged between 15 and 49 have experienced emotional, physical or sexual violence at least once since the age of 15, According to the data of UNICEF. “Nearly 40 per cent of survivors of child sexual violence are aged below 18.”
Some 12,000 children are trafficked to India – mainly for the purpose of sexual exploitation – annually, the data revealed.
Posted by Kuvera Chalise at 10:21 PM No comments:


Chocofun, Jagadamba Steels, Pashupati Paints, Tokla Tea and Wai-Wai noodles have been nominated in the best domestic brands and Coca-Cola, Fair & Lovely, Asian Paints, Ncell and Standard Chartered Bank are the nominees in the multinational company category for the Best Brand Award 2013, according to the Federation of Nepalese Chambers of Commerce and Industry (FNCCI) that is going to present the awards on August 19.
The Best Brand Award 2013 – the first such award in the country – is a part of FNCCI’s National Excellence Award that has been established to honour business organisations with the National Excellence Award since 2001 to promote quality goods and services.
“Based on the criterion and performance indicators, the committee has shortlisted 10 nominees, five from each category – domestic and multinational – from among 30 companies, through multiple and scientific parameters,” according to the chairman of the FNCCI’s Productivity and Quality Committee Saurav Jyoti.
The award is expected to inspire brands and business houses to make their products more competitive and qualitative, he said, adding that the awards will also promote quality products and services.
“The award aims at encouraging business organisations to improve their quality of management and deliver customer service excellence,” added Jyoti, who is also the president of Young Entrepreneurs’ Forum under SAARC Chambers of Commerce and Industry, added.
The best brands award will be announced on the basis of SMS voting and through likes on Facebook page of FNCCI National Excellence Awards 2070.
The voting for the event started from July 21 and ends on August 8.
Posted by Kuvera Chalise at 7:18 PM No comments:

Nepali Congress assures private sector of its support, to include its agenda in CA election manifesto 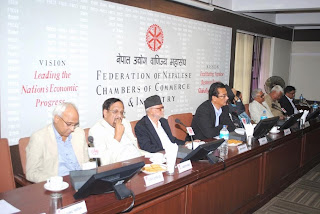 Posted by Kuvera Chalise at 11:01 PM No comments: