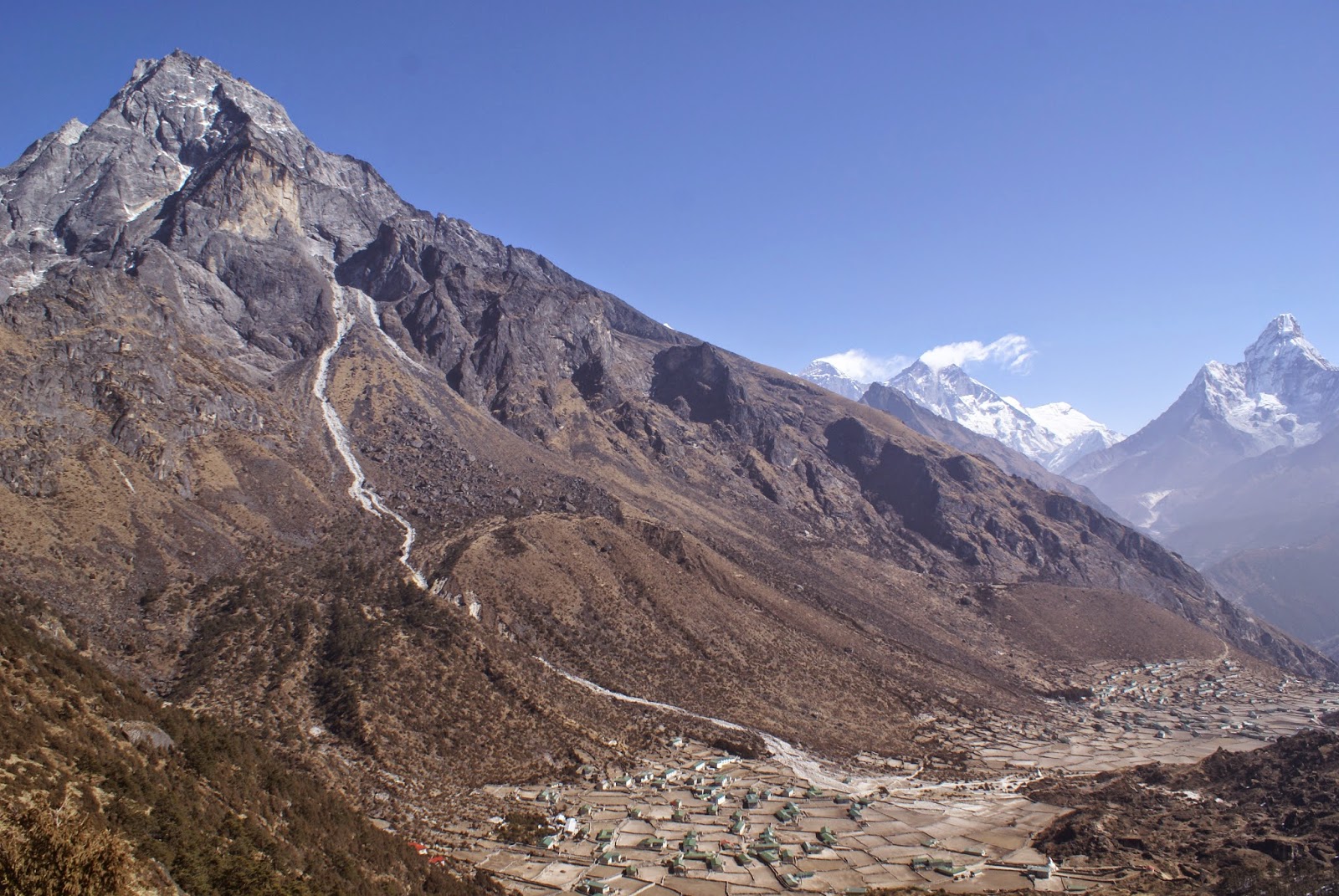 Lonely Planet ranked Khumbu region – also known as the Mt Everest region – among the 10 best regions to explore in 2015.
The Australia-based world’s largest travel guide publisher, cautioning the would-be visitors about recent mishaps in Nepal, has placed Nepal in the sixth spot after Gallipoli in Turkey, Rocky Mountain National Park in the US, Toledo in Belize, Tasmania in Australia and Norway Arctic in Norway.
"Mt Everest was a classic journey following in the footsteps of Tenzing and Hillary into the planet’s most jaw-dropping mountain arena, home to the world’s highest peak," it wrote, adding that trekkers are rediscovering the region’s remoter trails, with Nepal’s Maoist uprising firmly behind it. "We don’t really need to sell one on the mountain glories of the Khumbu region; just a whisper of the word ‘Everest’ and everyone in the room snaps to attention."
The travel guide publisher has also asked to try the high-altitude Three Passes trek or adventurous Mera Peak expedition. "And since 2015 marks a half-century since Major Jimmy Roberts organised the first commercial trek in Nepal, it might be time to dust off those trekking boots,” the guide book further said, suggesting to tread the old-school approach routes to Mt Everest from Jiri and Tumlingtar, along parts of the 1,700-km-long Great Himalaya Trail, if one wants something more authentic. "Already popular, the trails to Mt Everest are only going to get busier in future seasons."
Why trek to Everest, Lonely Planet elaborates, "Well, as Mallory famously quipped, ‘Because it’s there’."
This month’s tragic events in Annapurna region, which killed dozens of trekkers have pushed mountain safety to the top of the agenda. "Extreme weather can occur in the Himalaya at any time, and it is essential to monitor local weather conditions and seek shelter if conditions deteriorate," it suggested, asking the trekkers to be properly equipped – on any trek – and "inform people of where you are going and when you will be back, and seek local advice as you trek.”
Fans of the bizarre will want to hike up to Khumjung Monastery to get a peek at its yeti scalp," it said, adding, "nearby Pangboche Monastery had its famous yeti hand stolen in 1991, but a replica is now on display."
With 60 flights daily at the Lukla airport – the airport at the highest part of the world – in the peak season and 200 people queuing up to attempt Mt Everest on a good day, overcrowding on the trails is an ever-pressing issue. The crowd has also increased waste dumped around. Finding a sustainable way to deal with the waste produced by so many trekkers and porters in such a remote region is a complex problem, though solar-powered technology is making a difference in many trekking lodges, it added.
However, each Mt Everest climber is required to carry eight-kg of waste off the mountain – to clean the garbage – from this year. "Likewise, air safety in Nepal is yet another concern, after air crashes in 2010, 2011 and 2012 killed dozens of trekkers and Nepali staff en route to or from the region," it added.
The Mt Everest region receives around 36,000 trekkers and mountaineers annually. Many of the lodges one stays in will be run by retired summiteers, and most families have at least one member employed as a climbing porter or trekking guide," Lonely Planet wrote.
Posted by Kuvera Chalise at 11:01 PM 8 comments:

Investment Board of Nepal is going to approve Rs 25 billion cement factory.
The board meeting after the Tihar festival is going to approve India's Reliance Industries' Rs 25 billion cement factory for foreign direct investment, informed external affairs head of the board Ghanashyam Ojha.
The board – chaired by the Prime Minister Sushil Koirala – has received the proposal from the Reliance Industries that is owned by India's Ambani group, he said, adding that the company is planning to set up the cement factory in either the central region or the eastern region of the country. "The Department of Mines and Geology has already given its permission to the factory in mid-July."
The approval got delayed due to the board's busy schedule with the project development agreement (PDA) on Upper Karnali Hydropower Project with another Indian firm GMR.
After the board's approval – post Tihar festival that ends on October 25 – Reliance will conduct environmental impact assessment (EIA). The company will then submit the EIA report to the board, through Ministry of Environment.
After the clearance of the EIA from the board, Reliance will start the work to set up the factory, Ojha added.
Reliance has, however, demanded that the government provide 60 MW of uninterrupted supply of electricity to the factory, he said, adding that the company has demanded that it should be provided subsidy in the import of coal or other fuel for generating electricity, in case the government is unable to provide uninterrupted supply of electricity.
More cement companies both domestic and foreign investment are coming up lately as the demand for cement has increased due to construction of big infrastructure projects including hydropower projects lately.
The government – to encourage the cement industries – promised to provide access road and electricity to new cement factories. According to Trade and Exports Promotion Center (TEPC), import of cement has gone down by 19.2 per cent to Rs 3.18 billion in the fiscal year 2013-14 compared to a fiscal year ago in 2012-13, when the country saw Rs 3.94 billion worth cement import. But the country has seen rise in import of clinker as most of the domestic cement factories are dependent on imported raw material for cement that is clinker. Only few of the cement factories rely on domestic mines and majority of them have been importing clinkers.
According to central bank, in the fiscal year 2013-14, the country imported Rs 9.71 billion worth cement and clinkers that is some three per cent higher than that of a fiscal year ago in 2012-13, when the country imported Rs 9.42 billion worth cement and clinkers.
Posted by Kuvera Chalise at 10:29 PM No comments: 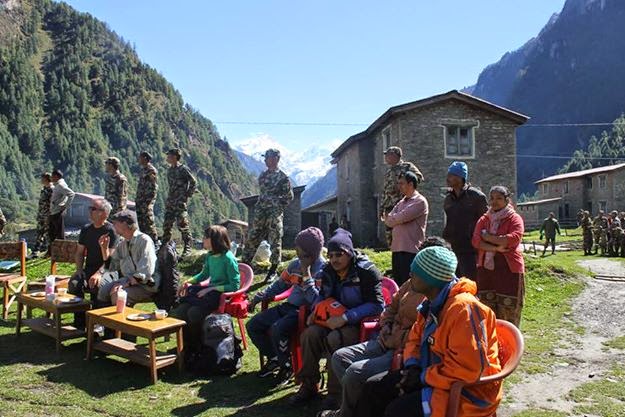 A team of Trekking Agencies’ Association of Nepal (TAAN) rescued some 77 trekkers from different parts of Manang district today.
"Of the total rescued trekkers, some 17 were Israelis, 29 Nepali support staff, five Indonesians, 10 Germans, five Spanish, four Indians, three Canadians, two Russians, and two Polish, said the association that had deployed two choppers – AS 350 B3 and MI 17 – for rescue works.
Likewise, rescue workers have recovered 10 bodies from Phu and Kangla area of Manang district.
The association had sent rescue team from land route in the Mustang side of Thorang La Pass. The team brought down five bodies – two Nepalis, two Israelis and one Polish - today. Similarly, one more body has been brought down to Jomsom. They have not been identified yet.
With today's deceased, the total number of death toll in Mustang side has reached 10. Rescue teams had recovered four bodies yesterday.
Rescue team of Nepal Army has told us that there are eight bodies near Doomcamp below Thorong Pass, second vice president of TAAN Pokhara Chapter Hari Bhujel, said from Mustang. "We will bring them down tomorrow."
According to Mustang chief district officer Baburam Adhikari, 64 trekkers from different countries, including Nepali support staff, were rescued from Mustang yesterday.
The association's executive members Ang Pemba Sherpa and Pasang Tendi Sherpa were in the rescue team, whereas TAAN president Ramesh Prasad Dhamala oversaw rescue works in Manang.
Coordinator of TAAN’s Rescue Department Keshav Pandey coordinated the rescue works from Pokhara. Likewise, first vice president Kami Rinji Sherpa, general secretary Sagar Pandey and treasurer Gopal Babu Shrestha were at TAAN Secretariat to coordinate the rescue works, while executive member Vidya Hirachan was at Tribhuvan International Airport (TIA) to facilitate the operation.
Posted by Kuvera Chalise at 9:34 PM 1 comment:

Nepal is still one of the least economically free countries in the world, according to an international report.
Nepal continues to be one of the least economically free countries ranking 126 out of 152 countries with an overall score of 6.16, which is slightly lower than last year's score, the annual Economic Freedom of the World report 2014 revealed. Nepal ranked 125 with a score of 6.19 last year.
The report released today in Brussels concluded that Nepal's scores reveal weaknesses in Legal System and Property Rights, Labour Market Regulations and Regulatory regime for trade and business.
The report measures the economic freedom – including levels of personal choice, ability to enter markets, security of privately owned property, and rule of law – by analysing the policies and institutions of 152 countries.
Lower level of economic freedom could be attributed as a reason behind's Nepal's inability to catch up with other developing nations which are experiencing higher levels of economic growth owing to reforms that make it easier to trade and do business.
The peer-reviewed report that uses the data of two years back is released annually. Therefore, the 2014 report provides ratings for the year 2012, the most recent year for which comprehensive data is available.
Nepal showed mixed performance in regards to all the five measured areas of economic freedom in the 2014 report. Though its ranking and scores in some of the areas have improved, Nepal’s overall performance in terms of economic freedom continues to be low.
Nepal scored less in two of the five key areas of economic freedom. Under size of government Nepal's score decreased from 7.6 in the previous year to 7.4 this year. Likewise, under regulation of credit, labour and business, the country's score slightly decreased from 6.5 in previous year to 6.4 this year.
However, under legal structures and security of property rights, the score remained unchanged at 4.2, and freedom to trade internationally, the score unchanged at 6.4, whereas under access to sound money, the score increased slightly from 6.3 in the previous year to 6.4 this year, the report added. "The score is awarded from 1 to 10, where a higher value indicates a higher level of economic freedom and a higher ranking."
The Fraser Institute – Canada's top ranked think tank – produces the annual Economic Freedom of the World report in cooperation with the Economic Freedom Network, a group of independent research and educational institutes in nearly 90 nations and territories.
The Economic Freedom of the World Report uses 42 variables to construct a summary index and measure the degree of economic freedom of countries around the world. The cornerstones of economic freedom are personal choice, voluntary exchange, freedom to compete, and security of private property. Economic freedom is measured in five different areas: (1) size of government, (2) legal structure and security of property rights, (3) access to sound money, (4) freedom to trade internationally, and (5) regulation of credit, labour, and business.
According to the report, Hong Kong, once again, is the most economically free jurisdiction in the world followed by Singapore, New Zealand, Switzerland, Mauritius, United Arab Emirates, Canada, Australia, Jordan and (tied for 10th) Chile and Finland.
Likewise, the report, based on 2012 statistics (the most recent year of available data), the US that was once considered a bastion of economic freedom now ranks 12th in the world, tied with the UK, whereas Japan (23rd), Germany (28th), Russia (98th), India (110th) and China (115th) are some of the economically free countries.
However, the 10 lowest-ranked countries are Myanmar, Democratic Republic of Congo, Burundi, Chad, Iran, Algeria, Argentina, Zimbabwe, Republic of Congo and Venezuela, which retains the title of the world’s least economically free country.
Some despotic countries such as North Korea and Cuba could not be ranked due to lack of data.
Globally, the average economic freedom score dropped slightly to 6.84 out of 10 from 6.87 last year.
Like previous years, Samriddhi Foundation – one of the co-publishers of the report – has released the report in Nepal this year. The report demonstrates a strong link between economic freedom and prosperity whereby the most economically free countries have shown to offer the highest quality of life and personal freedoms.
Posted by Kuvera Chalise at 10:50 PM 9 comments: