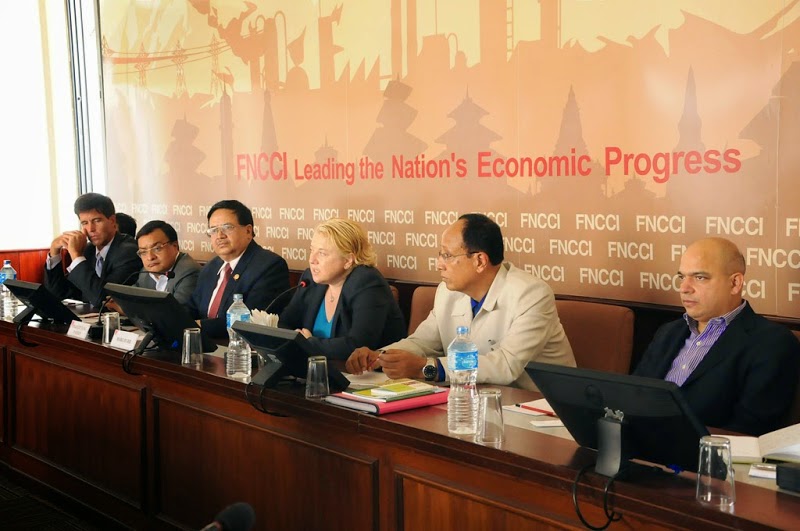 Transparency, rule of law, efficient court and its independency are keys to attract investors, according to a visiting US trade representative.
The US investors look for a transparent system, law and order and investment friendly policies to invest in Nepal, said deputy assistant of United States Trade Representative for South and Central Asia Mara Burr here on today.
Addressing private sector at Federation of Nepalese Chambers of commerce and Industry (FNCCI), she said that Nepal should concentrate on products and services that have comparative advantage.
Burr is on Kathmandu visit to prepare for the Trade and Investment Framework Agreement (TIFA) preparatory meeting that was scheduled three years ago, but has been delayed due to various reasons.
During the meeting, the private sector representatives requested her to help Nepalis goods get easy access in the US market and encourage US investors to make investments in Nepal.
Despite having high export potential, Nepali products have failed to get market access in the US, they said, asking for policy arrangement to ensure market for innovative Nepali products in the US. The private sector representatives also requested Burr to give accreditation to Nepali lab for smooth quality certification of Nepali products and allow Nepali exporters to participate is US trade fairs.
Against the backdrop of US authorities rejecting access of many Nepali products to the US market on quality grounds, they also urged the US to help establish internationally recognised quality control lab in Nepal.
Burr will hold preparatory meeting with government officials for TIFA Council Meeting tomorrow. The meet will discuss agendas for the TIFA Council Meeting to be held in Kathmandu and fix the date.
The FNCCI president Pradeep Jung Pandey, on the occasion, urged the US authorities to also encourage US investment in potential sectors like hydropower, infrastructure development, and tourism in Nepal.
Posted by Kuvera Chalise at 11:51 PM 10 comments:


The government today opened the Khurkot Bridge over the Sunkoshi River, substantially enhancing connectivity between hilly regions – particularly Ramechhap, Dolakha, and Sindhupalchowk districts – and  the Terai districts.
The bridge built with financial assistance from the Asian Development Bank (ADB) will also serve as an important link crossing the mid-hill highway and providing the shortest land route between the People’s Republic of China and India.
“Enhanced connectivity and mobility are vital for local economic development and poverty reduction,” said ADB’s country director for Nepal, Kenichi Yokoyama, after the inauguration of the bridge by the minister for Transport Bimalendra Nidhi.
“Khurkot Bridge will provide a vital lifeline to the people in the northern hilly terrains along the Sunkoshi River,” he said, adding that it will link them to essential services offered in other parts of the country, and open up a wide range of opportunities like high value agriculture, tourism, and trades. “It is truly a symbol of development.”
“Before the construction of the bridge, people and cargo had to first come to the capital city of Kathmandu and then travel to the Terai districts which was time consuming, costly, and cumbersome.
The seven meter bridge that was completed at a cost of $1.8 million has connected Ramechhap and Dolakha districts directly to Terai for the first time by road networks,” said project director in the Department of Roads Umeshananda Misra.
The $55.2 million Roads Connectivity Sector I Project, of which the Khurkot Bridge is a part, is being completed in 12 districts. A total of 318-km of strategic roads have been upgraded to fair weather standards under the project. Three district headquarters have been connected to all weather roads for the first time, including Dhunche of Rasuwa, Manthali of Ramechhap, and Taplejung of Taplejung districts.
The main objective of the project is to reduce the isolation of remote rural communities, mostly in hilly regions by enhancing access of the isolated and disadvantaged population to the basic services and employment opportunities.
With improved connectivity, they will have easier access to health and education in major towns and district headquarters. Improved connectivity will also substantially reduce the price of basic consumer goods while enhancing the farm gate prices of agriculture products in large areas adjacent to the roads. The project is also helping to increase awareness about HIV/AIDs and anti-trafficking.
Posted by Kuvera Chalise at 11:48 PM 4 comments: