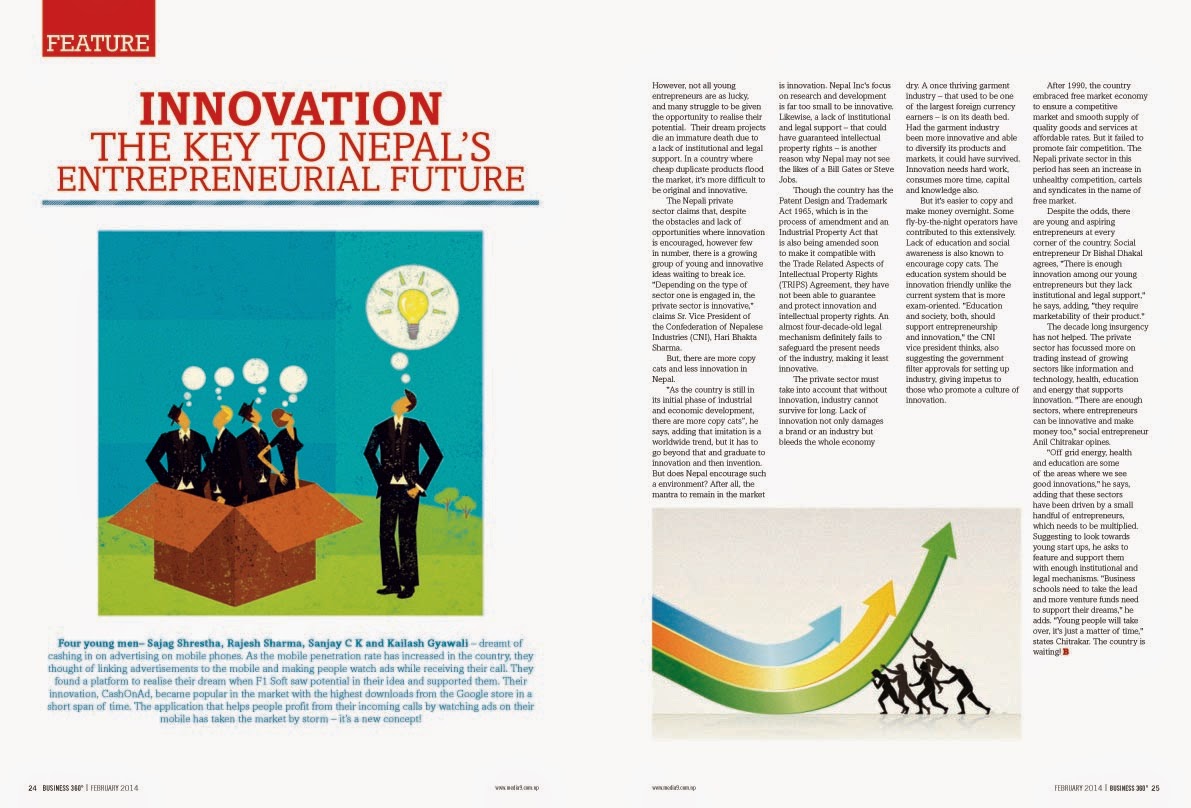 Four young men – Sajag Shrestha, Rajesh Sharma, Sanjay C K and Kailash Gyawali – dreamt of cashing on advertising on mobile phones. As the mobile penetration rate has been increasing in the country, they thought of linking advertisements to the mobile and making people watch ads directly while receiving their call.
They got a platform to realise their dream when F1 Soft saw potential in their idea and supported them.  Their innovation CashOnAd became popular in the market with highest downloads from the Google store in a short span of time. The application that helps people en-cash their incoming calls by watching ads on their mobile has taken the market by storm – it’s a new concept!
However, not all the young entrepreneurs are as lucky and many struggle to be given the opportunity to realize their potential.  Their dream projects die an immature death due to lack of institutional and legal support. In the country where cheap duplicate products flood the market, it's more difficult to be original and innovative.
The Nepali private sector claims that despite the obstacles and lack of opportunities where innovation is encouraged, however few in numbers, there is a breeding group of young and innovative ideas waiting to break ice. "Depending on the type of sector one is engaged in, the private sector is innovative," claims Sr. Vice President of the Confederation of Nepalese Industries (CNI), Hari Bhakta Sharma.
But, there are more copy cats and less innovation in the Nepal Inc.
"As the country is still in its initial phase of industrial and economic development, there are more copy cats”, he says, adding that imitation is a worldwide trend but it has to go beyond that and graduate to innovation and then invention. But does Nepal encourage such environment – after all, the mantra to remain in the market is innovation. Nepal Inc's focus on research and development is far too less to be innovative. Likewise, lack of institutional and legal support – that could have guaranteed intellectual property rights – is another hurdle why Nepal may not see the likes of a Bill Gates or Steve Jobs.
Though the country has Patent Design and Trademark Act 1965, which is in the process of amendment and Industrial Property Act that is also being amended soon to make it compatible with Trade Related Aspects of Intellectual Property Rights (TRIPS) Agreement, they have not been able to guarantee and protect innovation and intellectual property rights. An almost four decade old legal mechanism definitely fails to safeguard the present needs of the industry making it least innovative.
The private sector must take into concern that without innovation, industry cannot survive for long. Lack of innovation not only damages a brand or an industry but bleeds the whole economy white. A once thriving garment industry – that used to be one of the largest foreign currency earners – is on its death bed due to lack of innovation and legal support mechanism. Had the garment industry been more innovative and able to diversify its products and markets, it could have survived. Innovation needs hard work, consumes more time, capital and knowledge also.
But it's easier to copy and make money overnight. Some fly-by-the-night operators have contributed to this extensively.  Lack of education and social awareness is also known to encourage copy cats. The education system should be innovation friendly unlike the current system that is more exam-oriented. "Education and society, both, should support entrepreneurship and innovation," the CNI vice president thinks, also suggesting the government filter approvals for setting up industry giving impetus to those who promote the culture of innovation.
After 1990, the country embraced free market economy to ensure a competitive market and smooth supply of quality goods and services at affordable rates. But it failed to promote fair competition. The Nepali private sector in this period has seen an increase in unhealthy competition, cartels and syndicates in the name of free market.
Despite the odds, there are young and aspiring entrepreneurs at every corner of the country. Agrees social entrepreneur Dr Bishal Dhakal, "There is enough innovation among our young entrepreneurs but they lack institutional and legal support," he says, adding "they require marketability of their product."
The decade long insurgency has not helped. The private sector has focused more on trading instead of growing sectors like information and technology, health, education and energy that supports innovation. "There are enough sectors, where entrepreneurs can be innovative and make money too," social entrepreneur Anil Chitrakar opines.
"Off grid energy, health and education are some of the areas where we see good innovations," he says, adding that these sectors have been driven by a small handful of entrepreneurs, which needs to be multiplied. Suggesting to look towards young start ups, he asks to feature them and support them with enough institutional and legal mechanism. "Business schools need to take the lead and more venture funds need to support their dreams," he adds. "Young people will take over, it's just a matter of time," states Chitrakar. The country is waiting!
(Published in Business 360 magazine February 2014 issue)
Posted by Kuvera Chalise at 11:40 PM No comments: