Investment Board of Nepal, GMR sign PDA for Upper Karnali 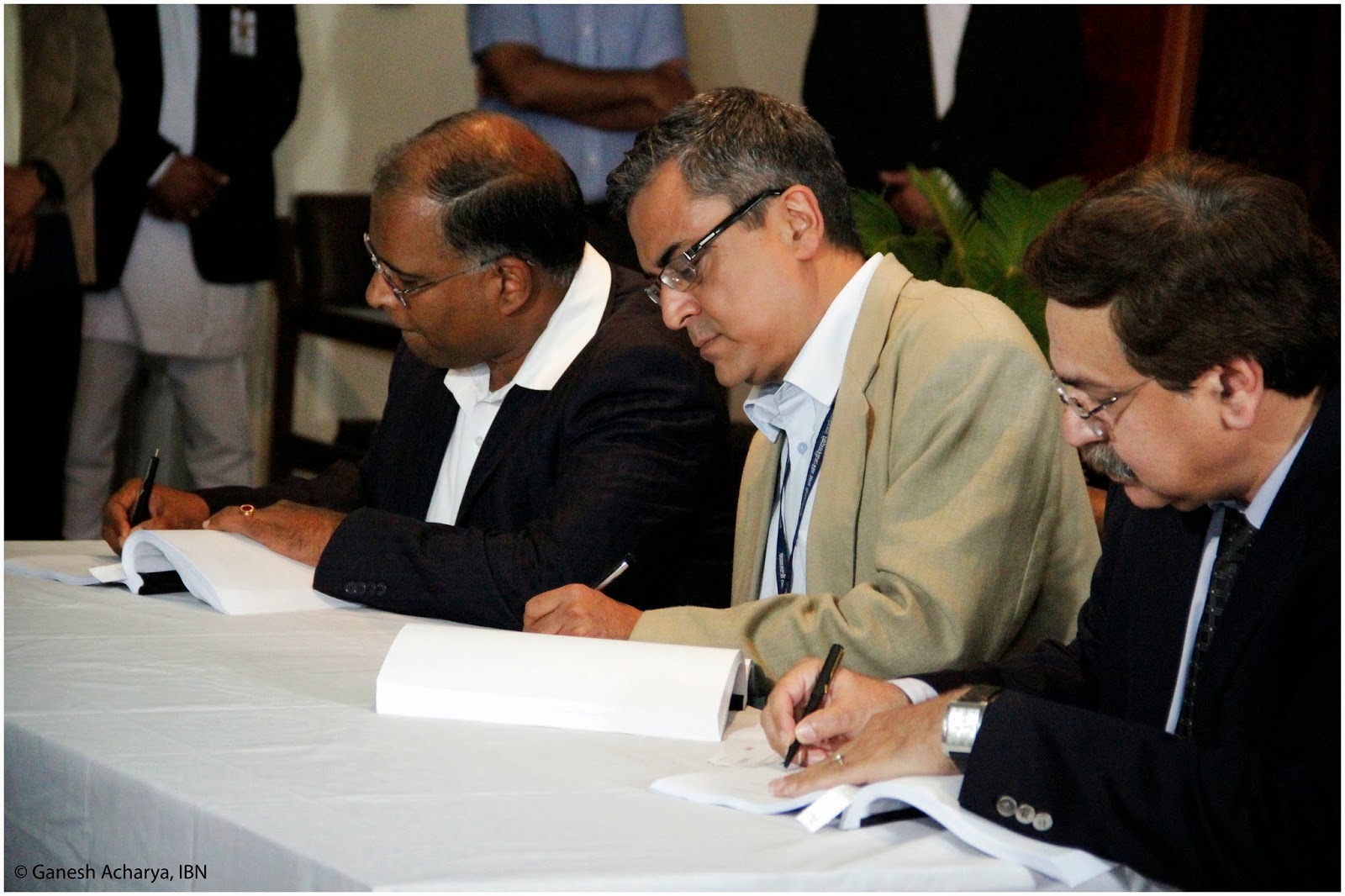 Investment Board of Nepal and Indian company Grandhi Mallikarjuna Rao (GMR) Energy today signed Project Development Agreement (PDA) for construction of the $1.5 billion Upper Karnali Hydropower Project in western Nepal.
Investment Board of Nepal chief executive officer Radhesh Pant, president of Hydro Energy Business Unit of GMR RV Seshan and Nepal chief Harvinder Manocha signed the agreement after six years of signing of memorandum of understanding between Nepal government and India’s GMR-ITD Consortium.
The Project Development Agreement is expected to open a door for the Indian company to move ahead for financial close and construction of the 900 megawatt Upper Karnali Hydropower Project.
According to the PDA, Nepal will get 27 per cent free equity and 12 per cent (108 MW) free electricity from the project. Likewise, the agreement also ensured handover of the project, along with the 100-km transmission line, to the government after 25 years of operation.
GMR is planning to sell the remaining 88 per cent energy to India, Bangladesh and Nepal. However, the price will depend on the final project cost and the situation of demand and supply in the market on completion of the 900 MW hydel project.
Likewise, GMR will also construct a 2-MW project that will supply electricity round the year to locals. More than 2,000 people are expected to get employment opportunity from the project estimated to cost Rs 145 billion.
The project will bring road connectivity, hospital, technical school and bridge in the district.
Prime Minister Sushil Koirala, some of his cabinet colleagues, senior government officials, visiting Indian home minister Rajnath Singh and ambassador to Nepal Ranjit Rae were present at the signing ceremony at Singha Durbar in Kathmandu, on the occasion.
The agreement will be implemented with immediate effect, said deputy prime minister and home minister Bam Dev Gautam, after signing of the agreement.
"The agreement has opened the door for developing other large hydropower projects in Nepal," he added.
Likewise, wishing timely completion of the project visiting Indian home minister Singh termed the agreement a 'historic' one. "I believe this is the single biggest foreign investment in the history of Nepal," he said, adding that the success of GMR in Nepal will ensure credibility of both the company and India both.
The Investment Board of Nepal had been working hard on PDA negotiation with GMR since last June. But according to Pant, serious negotiations actually began last September. "Today's PDA agreement is the outcome of several rounds of discussions with stakeholders and has addressed issues raised by them," he said, adding that the board has prepared the PDA document according to the international norms and standards and good practices. Pant also said Nepal can buy energy at competitive market rates from the export-oriented project.
"GMR Group will mobilise 25 per cent equity capital while the remaining 75 per cent will be raised from international lenders including International Finance Corporation (IFC)," Seshan said, after signing the agreement.
There will not be any problem in raising prerequisite equity and debt capital to execute the project,” he said, adding that the GMR was confident of completing the financial closure within two years, according to the PDA. "We will implement the project within the next five years."
However, construction of re-regulating dam by GMR is yet to be finalised.
"The decision will be taken based on the consultation with Nepal government once the joint study team submits its report,” Seshan added.
According to the PDA, the Indian developer will have to build the re-regulating dam on its own, if the study report shows Upper Karnali will impact water flow for downstream irrigation project. Construction of the re-regulating dam was suggested by an independent study team has been included in the PDA document after experts and Irrigation Ministry drew attention to the matter, saying the hydropower project would affect irrigation projects.
Likewise, planning commission vice chair Dr Govind Raj Pokharel, who led the technical team to study the PDA, hoped that the PDA signing would be a first step towards the prosperity of Nepal. "It will also send message of an improved investment climate in the country," he added.
The Cabinet has approved the PDA yesterday after the Investment Board of Nepal approved the amended PDA draft a day ago on Thursday.
The government yesterday also formed a high-level task force led by Dr Pokharel for the implementation of the project that is planned to be generate power by 2021. The panel will help address problems arising during project development.
The 900-MW Upper Karnali Hydro Power project – located on Karnali river in the Surkhet, Dailekh and Achham districts – was awarded to the GMR Group through an International competitive bidding process in 2008 on BOOT model.
Posted by Kuvera Chalise at 10:08 PM 10 comments:

The US Mission in Nepal, through the US Agency for International Development (USAID), today announced – during a Resilience Summit organised in the valley – three new programmes with up to $70 million in funds that will help communities more quickly recover from natural disasters and other stressors.
The Summit brought together government officials and development experts to look for new models to solve complex and interrelated challenges such as extreme poverty, food security, and climate shocks. Working under the leadership of the Nepal government, the US government aims at saving and improving more lives, building inclusive economic growth, and decreasing the need for humanitarian assistance.
"Resilience is essential if we are to win the fight against poverty," US ambassador Peter Bodde, shared addressing the Summit. "We know we cannot prevent floods and landslides, but we can work much harder and more strategically to ensure these shocks don’t devastate families or set back hard-won development gains," he added.
"The government sees resilience as a vital framework to help alleviate poverty and promote more sustainable development, lessening the impacts of disasters," said chief guest at the Resilience Summit, vice chair of National Planning Commission Dr GovindaPokhrel. "That will take creativity, innovation, and cross-sectoral partnerships, and we are pleased that USAID is highlighting this most important priority."

Up to $70 million Community Resilience Programme is an integration in disaster risk reduction and climate change adaptation into USAID’s food and nutrition security efforts in Nepal. "A quarter of Nepal’s population lives below the international poverty line of $1.25-per-day, and the programme will benefit an estimated five million of the most vulnerable in hilly regions," Bodde said.
Under the $500,000 Innovative Early Warning Flooding System, the USAID’s Office of Foreign Disaster Assistance will fund an early warning system to help protect communities in the Eastern region from flooding, he said, adding that the project will install gauges along flood-prone rivers and share real-time data with district authorities using SMS and email. "It will help save lives in the event of flood."
Likewise, a $100,000 Science and Technology Competition for Resilience programme is a call for bold and innovative solutions to 'building sustainable food security' in Nepal. "The Competition opens on September 4, and will be open to individuals, non-profits, academic institutions, and the private sector, with a focus on districts primarily in the Mid- and Far-West regions of the country," Bodde added.
Posted by Kuvera Chalise at 5:22 PM 15 comments: