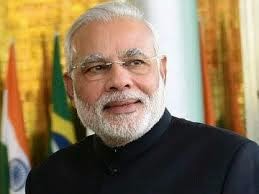 To the surprise of law makers, he started his speech in Nepali and neither did he try to hide India’s interest in Nepal’s hydropower but Indian Prime Minister Narendra Modi – who arrived here in Kathmandu for a two-day official visit this morning – held the parliamentarians spell bound for around one hour with his impromptu address at the Legislature-Parliament today afternoon.
Modi also recollected his older days, when as a young boy, he visited Nepal many years ago in his quest for spirituality.
Nepal-India ties are as old as the Himalayas and the Ganges, he said, “But I am eager to take the age-old time-tested bilateral relations to a new height during my stint as the Indian premier.”
Modi is the first head of the government to address the Parliament.
Lauding the Nepali Maoists efforts to shun bullet and join ballet to change the course of Nepal’s history, Modi said Nepalis can send the message to the world that history can be made from democratic process rather than from the barrel. ‘By drafting a democratic constitution of the Federal Democratic Republic Nepal, Nepali lawmakers are going to show the world a new example,” he said, adding that Nepal has a huge potential in herbal products, hydropower and tourism that can strengthen economy for the larger benefit of its people.
“Over a billion Indian populace wants to visit Nepal once in their lifetime to pay homage to Pashupatinath and the birth place of Lord Buddha,” added Modi, whose Bharatiya Janata Party came to power a couple months back, with a sweeping majority.
Preaching his development formula for Nepal, Modi said that Nepal can prosper alone by exporting electricity to India. “I want to support Nepal to make it HIT – highways, information technology and transmission line – that can transform Nepal, he said, adding that the trans-border transmission line can help Nepal import more electricity at present and export after a decade when it will have surplus power.
Likewise, he also announced a credit line of $1 billion to be used in infrastructure development and energy projects. Modi also promised to increase the number of scholarship to Nepali students.
Before addressing the Patliament, Modi, who had arrived via a special aircraft of Indian Air Force (IFC54 Boeing 737) that landed at Tribhuvan International Airport (TIA) in Kathmandu at 10:46, held discussion with Prime Minister Sushil Koirala at the Office of the Prime Minister at Singh Durbar.
They witnessed a signing ceremony of two Memorandum of Understandings – on Goitre control in Nepal and cooperation between NTV and Doordarshan – and exchange letters of the Term of Reference for Pancheshwor Development Authority. Pancheshwor Multipurpose Project – that has been delayed by 16 years after signing – is one of long due promises of Indian government that it has been failing to implement.
The two Prime Ministers also affixed the first cancellation mark on the commemorative cover issued by the Nepal Philatelic Bureau marking the visit of the Prime Minister of India, the first bilateral visit by an Indian Prime Minister in 17 years.
During the talks at Singh Durbar, Modi expressed his willingness to extend all possible support to Nepal’s peace process and its development endeavors.
Following the meeting, they also held delegation-level talks in which the two sides reviewed the overall state of bilateral relations and cooperation between Nepal and India.
They expressed satisfaction at the reactivation of Nepal-India Joint Commission with its third meeting in Kathmandu recently and directed their respective authorities to take up the implementation of the decisions taken during the Joint Commission meeting.
The two sides, on the occasion, discussed on a gamut of issues between the two South Asian neighbours, including political cooperation, trade and transit, development cooperation, water resources, earlier treaties and agreements including the 1950 Treaty of Peace and Friendship, mutual security, and boundary issues.
They also directed the authorities in their respective countries to expedite ongoing projects for their timely completion, and explore new areas of cooperation which could be taken up for mutual benefit.
In a departure from protocol, Prime Minster Sushil Koirala had personally welcomed his Indian counterpart at the international airport, where Nepal Army offered a guard of honour and a 19-gun salute to Modi.
Posted by Kuvera Chalise at 11:51 PM 13 comments: