The Delegation of the European Union (EU) to Nepal organised training for Nepali auditors and accounting officers in grant projects on the different aspects of auditing, for the first time. They discussed general rules related to auditing practices and the overall approach to ensure quality while carrying out the audits related to projects funded by the European Union.
During three successive days from February 25, a senior auditor of Ernst & Young, Brussels Renaud Bolly gave the training to around 120 auditors and accountants.
Addressing the final day of the training,  ambassador and Head of the European Union Delegation to Nepal Dr Alexander Spachis said that the European Union has been assisting Nepal in different areas of development  such as education, peace building, food security, mitigation of negative impacts of climate change to mention a few.
"The European Union has been assisting Nepal's efforts for development and democratisation despite the economic hardships that the EU Member States have been facing back home," Dr Spachis said, adding that it makes additional attention to ‘value for money’ and good governance in our projects even more important.
He hoped that the training for the auditors and accountants would help them understand better the auditing procedures of the European Union.
Addressing the training, deputy head of the Finance, Contract and Audit section of the EU Delegation to Nepal Renate Stangl said that bringing together auditors, accountants and EU officials enhances the mutual understanding of the applicable rules. It is of particular importance given the multitude of actions of the EU programmes where rules might also change over time, he added.
Posted by Kuvera Chalise at 11:36 PM 2 comments:

ADB president Kuroda to Step Down on March 18


As a result of the nomination by the Cabinet of Japanese Prime Minister Shinzo Abe of Asian Development Bank (ADB) president Haruhiko Kuroda as governor of the Bank of Japan, ADB announced today that Kuroda has submitted his resignation from ADB, effective March 18.
An election of a successor to complete Kuroda’s term will be held by the Board of Governors of ADB in accordance with ADB’s Charter. 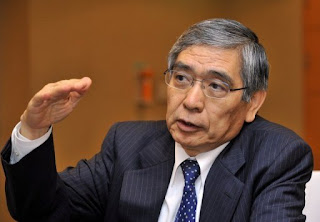 “I have been deeply honored to have served as ADB president and chairperson of ADB’s Board of Directors,” Kuroda said, adding that he has also been privileged to have worked with an exceptionally strong and committed Board and talented and dedicated staff. “I have every confidence in the continued success of ADB in the pursuit of its critical mission to alleviate poverty.”
Kuroda is a graduate of Tokyo University and the University of Oxford and previously served as Japan’s vice minister of Finance for International Affairs. He served simultaneously as president of ADB and chairperson of ADB’s Board of Directors. Kuroda was first elected by ADB’s Board of Governors in November 2004 and assumed office in February 2005. He was reelected for a third term in November 2011. His nomination to the Bank of Japan is subject to the approval of both houses of Japan’s Parliament.
Posted by Kuvera Chalise at 1:47 PM 13 comments:


After exploiting a generation of youth for over a decade, the ruling UCPN-Maoist' has – during its seventh national assembly in Hetauda on February 2-6 – claimed that it will form a ‘production brigade’ to boost production and entrepreneurship in the country.
The announcement has – if not only for public consumption and fool its cadres like the party’s earlier series of announcements – once again made the private sector suspicious on its intention regarding open market policy and role of private sector against state sponsored production brigade and crony capitalism.
“We believe that the state’s role is to bring a conducive policy to promote private sector that can boost production,” says Federation of Nepalese Chambers of Commerce and Industry (FNCCI) president Suraj Vaidya.
“Rather than creating confusing parallel structures, the government must create investment-friendly environment to encourage private sector, he said, adding that the private sector can generate more employment and encourage entrepreneurship compared to the government. “It will naturally encourage youths to become entrepreneurs instead of migrating to foreign lands for employment.”
In democracy, political parties announce policies claiming that they will implement these policies, if they will be elected and given the chance by the people. But in the autocratic regime, there will neither be election nor will the government responsible to the country and people, rather it keeps strengthening party in some way or other misusing public resources.
The UCPN-Maoist – that is currently leading the government – announcement of creating ‘production brigade’, is thus a clear indication that it is not serious on developing the country by industrialisation and increase in production, rather wants state and party’s control on public resources to misuse like the autocratic regime.
Neither can the UCPN-Maoist – a cadre-based party –force its politically indoctrinated cadre work, instead of living on easy money from donation, which they are used to since last one decade.
Liberal economic policy offers people more chance to create business and anyone can tap the potential unlike in the state-sponsored and controlled regime – though, the UCPN-Maoist fought for a class less society for a decade claiming over 30,000 lives – that creates a privileged class, where only few chosen ones will get opportunity.
Likewise, it will also be difficult for the cadres to accept the 360 degree turn in the ideologies in their leaders after a decade-long schooling of closing the industries to bargain for political gain.
Changing the militant cadres used to close industries into entrepreneurs is possible only in the open market economy, where there is competitive environment.
In the last eight years, the UCPN-Maoist twice got the chance to lead government, one headed by Puspakamal Dahal ‘Prachanda’ and the other is incumbent government led by Dr Baburam Bhattarai, who was the finance minister in Prachanda government. But both the governments failed to walk the talk, also because they never wanted development of the country. The Prachanda government witnessed a growth rate of 3.90 per cent from earlier government led by Nepali congress leader Girija Prasad Koirala, when the country posted the highest growth rate of 5.80 per cent.
Likewise, the country had witnessed the growth rate of 4.56 per cent in the last fiscal year. But it is not a coincidence as after the incumbent government took over, the economy has showed sign of falling down – to the lowest after Constituent Assembly (CA) elections – because of the UCPN-Maoist’s more confusing and visionless policies.
Likewise, UCPN-Maoist supremo Prachanda’s political dossier that claimed to form a ‘production brigade’ states that the country’s main task is to complete and institutionalise the capitalist people’s revolution, which they have been resisting since last one decade.
Though, in papers they seem more convincing in claiming that the political revolution cannot really be completed without an economic revolution, their action does not match their words as they are creating crony capitalism to control the state. 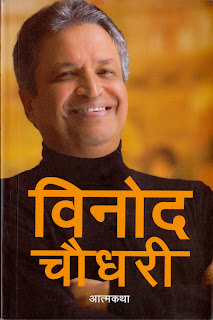 The journey of a businessman from New Road in Kathmandu to New York in the USA, ‘Binod Chaudhary Atmakatha’ – autobiography of Binod Chaudhary – gives different readers a different taste.
Going through autobiography, readers not only get to know the industrialist Binod Chaudhary and his struggles and success but also political and economic development of the country from the 60’s to the present date.
Reading the ups and downs of a successful industrialist will definitely inspire the younger generation but more than that it will also teach them how can one achieve success in life.
The book describes how Chaudhary continued his journey step by step, from the first fashion boutique to Copper Floor Disco, to multinational hotel chains.
His affiliation with royal palace, politics, politicians, music and his hobby, which almost killed him, of bikes reflect a boy next door image behind a ‘ruthless and shroud businessman’.
Though, the book revolves mostly around relationships between business and politics, it also has reflected the last six decades and country’s changing consumerism to rising private sector’s lead in policy level.
Chaudhary describes the story of Wai Wai – his flagship noodles brand – that according to him was one of the key turning points of his business plan – is one of the lessons to be learnt from going through the book as most of the readers might not know the story behind the starting of Wai Wai – that changed the today’s eating habit – in Nepal.
Chaudhary dared to dream and turn his dream into reality too. From Arun Emporium (1968) to Chaudhary Investments, Himalayan Intercontinental to Chaudhary Foundation, CG Education, CG Finco, Hospitality, Energy and Infrastructure to Financial Services to Telecom and recent agreement with Grammen Bank of Bangladesh for Social Business Fund, he has left not a single sector untouched.
The readers might not believe every word in an autobiography because sometimes autobiographies turn into self praise. But Chaudhary has also tried to clarify from his side on certain issues that he was involved in, may it be Federation of Nepalese Chambers of Commerce and Industry (FNCCI) politics and establishment of Confederation of Nepalese Industries (CNI), or his relationships with the royals, Nepali Congress, CPN-UML or deal of Nabil Bank, Mahalaxmi Sugar Mills or the latest controversy of VAT scam.
The book is also a nice read to know how an industrialist turns his failures into a steeping stones and how one major turning point changes the whole universe of business and leads to corporatisation of Bhuramal Lunkarandas Chaudhary to Chaudhary Group and establishment of Ganga Devi Chaudhray Uddhyog Gram, the model Special Economic Zone of the private sector.
Some claim autobiographies could not be true, others take it as a lesson and inspiration but Binod Chaudhary Atmakatha, is the first of its kind of book in our part of the world that is completely obsessed with politicians and politics and feels ashamed of talking of money, though everyone dreams of becoming rich over night.
Some of the readers might feel that the book is filled with much self praise, whereas others might take it as an inspiration. But as Chaudhary himself claims, he wants everything in his one life, not sacrifice something for the other. May be that’s why he is ‘ruthless and shrewd businessman’.

Commerz and Trust Bank Nepal IPO oversubscribed by over 11 times


Commerz and Trust Bank Nepal's Initial Public Offering (IPO) has been oversubscribed by over 11 times the size of the offering.
"The IPO received overwhelming support as some 72,000 applicants asked for shares worth Rs 6.82 billion," said chief executive of the bank Anal Raj Bhattarai.
"The market has shown tremendous confidence in the bank," he added.
The bank had opened its public offering for ordinary shares worth Rs 600 million at a face value of Rs 100 per unit on February 17. An investor was allowed to apply for a minimum of 50 unit shares and to a maximum of 1,500,000 units. The shares will be alloted proportionately based on the total amount of applications received within 40 days of the IPO's closing.
It will be the 29th commercial bank to be listed at Nepal Stock Exchange. Commerz and Trust Bank Nepal had appointed Citizens Investment Trust, Nabil Investment, Growmore Merchant Banker and Civil Capital as issue managers for the primary shares.
Posted by Kuvera Chalise at 11:53 PM No comments: