Metamorphosis of a Maoist ideologue 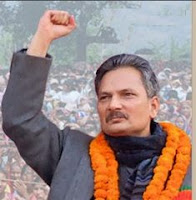 Three years ago, when he was finance minister in the Puspa Kamal Dahal 'Prachanda'-led government, he used to think share market as a gamble, though his own comrades have already invested in the market heavily taking advantage of open market economy.
But after three years, Dr Baburam Bhattarai as the fourth Prime Minister after the country is declared republic, has taken a 180 degree turn in his dogmatic communist economic view point of the share market and is serious on its continuous poor performance.
The Prime Minister requested the entrepreneurs last week during the dinner he has organised for the private sector at his official residence Baluwater, to come up with proposals to boost the confidence of investors as the share market has been continuously looking down. He not only showed serious concern on poor performance of share market but also vowed he is committed to the development of share market.
But it was too late to realise the importance of the capital market that is considered one of the best way of wealth creation and distribution. Had he understood that the share market is the mirror of economy three years ago, the situation could have been different.
Three years ago, when Bhattarai was the finance minister share market was really on the rally. It was hovering around 700 points, whereas today it is hovering around less than half at around 300 points. The down fall of the share market that started since his 'unpopular speech' terming the share market as gambling, has lost its confidence in the last three years.
At a time when the market is doing good, negative remarks from the government and its representatives would have immediate impact, but when the market is performing poorly, the positive remarks have lesser impact comparatively.
The share market's poor performance, at one point of time last year has even posed threat to the banks and financial institutions, though they are out of danger of margin type lending, currently. The exposure of banks and financial institutions on share market was not as huge as real estate but it was showing some signs of creating problem. The central bank tightened the margin type lending provisions to reverse it completely afterwards, which was of no use as by then the investors have already lost their confidence.
Bhattarai has come a long way round in three years to accept that capital market is a tool that can create and distribute wealth but it has become too late to correct it. Unless economy starts looking up and people have confidence on government and its policy consistency, it’s hard for the investors to believe him.
Prime Minister Dr Bhattarai even asked the business and corporate houses to list their businesses in the share market and help boost confidence. Obviously, many of the guests at his dinner did not take it seriously.
It’s not the first time the government has asked the corporate houses to list their business in the share market. Earlier governments, which were considered pro-market, had also urged them to list in the share market with lots of promises of incentives but they were never interested. And they will not be interested in Dr Bhattarai-led government, which is widely considered anti-market despite his recent pro-market promises and initiatives.
The Premier even asked what incentives would lure the business houses to list their businesses in the share market. But he either does not know or ignored why the listed companies of the same entrepreneurs have failed but not listed companies of the same entrepreneurs are still in operation.
What happened to the shareholders' money of those companies that were listed in the share market and are non-existent at present? More than three dozen companies vanished in the air in the last one decade and the share holders of those companies lost their hard earned money but the promoters of those companies have established new companies.
The UCPN-Maoist leaders themselves have conflicting views on economic policy keeping people guessing on what they are practicing and preaching.
The desperate Premier even asked the Finance Ministry to find loop holes on channeling investment without source, which is against the country's commitment to the Financial Action Task Force (FATF), to the share market. Currently, a transaction over Rs 1 million in a day comes under the Financial Information Unit scanner. He wants to raise the ceiling but could not as it is a commitment of the country to the international agency that looks after flow of dirty money.
Dr Bhattarai also forgot that Nepali investors are trend-based investors. And no one wants to lose their hard earned money by investing in poor performing market.
Similarly, the banks are offering more interest rates than the dividend yield of the shares forcing the investors deposit money in the banks and financial institutions rather than investing on shares. Despite the central bank's relaxation on margin type lending, the market did not respond as the return compared to the interest charged by the banks and financial institutions is still less.
The premier got enlightened at a wrong time, as after around the second quarter, when all the banks and finance companies that have all distributed dividends, the market slows down. His concern is appreciable, though investors have already lost heavily.
Posted by Kuvera Chalise at 11:50 PM