Chief executive officer of Citizens Bank International Rajan Singh Bhandari was elected as the president of Nepal Bankers' Association (NBA) today. He succeeded chief executive of Himalayan Bank Ashoke Sumsher JB Rana.
Bhandari, who is a former employee of central bank, has been serving Citizens Bank International since its inception in April 2007. Currently, the bank has a network of 14 branches in Kathmandu valley and 18 outside the valley.
According to Nepal Bankers Association's rule, the president and other executive members are elected every alternate year. It has a 13-member executive committee including two vice presidents, eight members and two advisors. 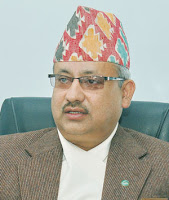 Thanks so much for giving everyone an extremely terrific chance to
read critical reviews from this website. It is often very great plus stuffed with amusement for me and my office
fellow workers to visit your website not less than three times every week
to read through the latest guidance you have.
And of course, I'm so usually fulfilled with the staggering tactics you serve. Certain two ideas in this post are absolutely the very best we've ever had.

Hello there! I know this is kinda off topic however , I'd figured I'd ask.
Would you be interested in exchanging links
or maybe guest authoring a blog article or vice-versa? My site
discusses a lot of the same subjects as yours and I believe
we could greatly benefit from each other. If you're interested feel free to shoot me an email. I look forward to hearing from you! Excellent blog by the way!

Feel free to surf to my weblog: dating services

I'm really impressed with your writing skills as well as with the layout on your blog. Is this a paid theme or did you customize it yourself? Anyway keep up the nice quality writing, it is rare to see a great blog like this one these days..

Look at my homepage :: dating 50 plus

One thing I've noticed is the fact there are plenty of fallacies regarding the banking companies intentions when talking about property foreclosure. One fairy tale in particular is the bank desires your house. The financial institution wants your hard earned cash, not your own home. They want the money they lent you together with interest. Staying away from the bank will undoubtedly draw any foreclosed conclusion. Thanks for your article.

I�m impressed, I have to say. Actually rarely do I encounter
a blog that�s each educative and entertaining, and let me let
you know, you have got hit the nail on the head.
Your idea is excellent; the issue is one thing that not sufficient persons are speaking intelligently about.
I am very glad that I stumbled across this in my seek for one thing relating to this.

One thing I have actually noticed is the fact there are plenty of beliefs regarding the lenders
intentions whenever talking about property foreclosures. One
fantasy in particular is always that the bank
wants your house. The bank wants your hard earned cash, not your house.
They want amount of money they gave you with interest.
Steering clear of the bank will draw the foreclosed summary.
Thanks for your posting.

Thanks for the diverse tips shared on this website.

I have seen that many insurance providers offer shoppers generous
special discounts if they decide to insure several cars with them.

A significant volume of households own several cars these days, particularly people with more aged teenage kids
still located at home, as well as savings with policies could soon mount up.
So it makes sense to look for a great deal.

Here is my web page on line dating

Thank you for every other fantastic post. The place else
may just anybody get that kind of information in such a perfect approach of writing?
I have a presentation subsequent week, and I'm at the look for such info.

In accordance with my study, after a the foreclosure home is
offered at a bidding, it is common for the borrower
in order to still have a remaining balance on the mortgage.

There are many loan merchants who try to have
all service fees and liens repaid by the subsequent buyer.
Nonetheless, depending on sp programs, polices, and state legal guidelines
there may be several loans which aren't easily settled through the shift of personal loans. Therefore, the responsibility still remains on the debtor that has had his or her property in foreclosure. Thanks for sharing your ideas on this weblog.

I found your weblog site on google and check a few of
your early posts. Proceed to keep up the superb operate.

I just further up your RSS feed to my MSN News Reader.
Looking for ahead to reading more from you in a while!
�

Feel free to surf to my page facebookofsex

I do agree with all of the ideas you've presented in your post. They are really convincing and will definitely work. Still, the posts are too short for starters. Could you please extend them a little from next time? Thanks for the post.

Hello, i think that i saw you visited my weblog so i came to �return the favor�.
I am attempting to find things to improve my site!
I suppose its ok to use some of your ideas!

Hi, Neat post. There's a problem along with your website in web explorer, might test this� IE nonetheless is the marketplace chief and a big portion of other folks will leave out your fantastic writing because of this problem.

What�s Happening i'm new to this, I stumbled upon this I've found It
absolutely helpful and it has aided me out loads. I hope to contribute & aid other users like its helped me.

Feel free to visit my webpage facebook for sex