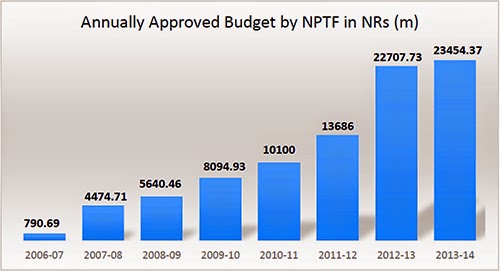 Some five donors decided to pull out of Nepal Peace Trust Fund (NPTF).
Denmark, Finland, Norway, Switzerland and UK’s Department for International Development (DfID) today decided to cease their financial support to the second phase of the fund that has been financing reconstruction and rehabilitation since the beginning of peace process. Now the fund has only European Union and USAID as its donors, as they signed a new Joint Financing Agreement with the government today. The second phase of the fund will begin from April, according to a statement issued by the delegation of European Union (EU) to Nepal, here today. According to the terms of the new Joint Financing Agreement that has approved a support of about Rs 2.4 billion (about $2.4 million) for peace building projects over the next two years, the fund is scheduled to close in July 2017.
Though, the donors – Denmark, Finland, Germany, Norway, Switzerland and the DfID – pulled out of the fund, they will continue to support peace building in other areas through different mechanisms, according to the statement.
Yesterday, the representatives from Denmark, Norway, Switzerland and DfID – during a meeting – have informed the minister for Peace and Reconstruction Narahari Acharya about their decision to pull out from the fund. The donors also informed that they could continue financial support, if the government holds local elections.
Delay in holding local elections, differences between the government agencies and donors over priorities and lack of transparency in financial dealings, government’s failure to address the transitional justice mechanism according to the international standards are said to be the reasons behind the donors’ move, according to government officials.
Likewise, the recent dispute over programmes in Nepal TV and Radio Nepal has also irked the donors, they said, adding that the donors themselves are also not very transparent.
Between its inception in 2007 and January 2014 – following the signing of Comprehensive Peace Agreement (CPA) to support Nepal's transition to peace from civil war – the government has provided Rs 11.3 billion and the eight donors have contributed Rs 9.3 billion making a total of Rs 20.6 billion (about $208.6 million). But in 2012, one of the initial donors, Germany had pulled out of the fund after the integration and rehabilitation of former Maoist combatants.
Though, finance minister Dr Ram Sharan Mahat – during the 17th board meeting of the fund – said that the government could thoroughly investigate the misuse of funds and ensure the completion of ongoing projects as soon as possible, the donors could not be convinced.
The 17th board meeting also approved a strategy implying support of about Rs 2.4 billion ($2.4 million) for peace building projects over the next two years. According to the new strategy, the fund will be used for activities in four focus areas including conflict affected people as defined by the government, access to security, including police service delivery, transitional justice in compliance with Nepal’s international and national commitments, and CA, consultations and elections.
Ambassador of the EU to Nepal Rensje Teerink – in the meeting that saw Mahat, Acharya and mission director of USAID Beth Dunford – said that the EU and other donors were keen to see significant progress in the statute writing that reflects the people’s aspirations, and 'hopefully local elections are held soon'.
She also stressed the need to bring victims' views into the peace process. "The fund has been a vital instrument for Nepal’s transition to peace,” she said, adding that the second phase will channel government, EU and USAID funds to priorities agreed with the government in the interests of the ongoing peace process. "Such work will need to comply with international standards as well as recent rulings of the Supreme Court in relation to transitional justice.
Posted by Kuvera Chalise at 11:50 PM