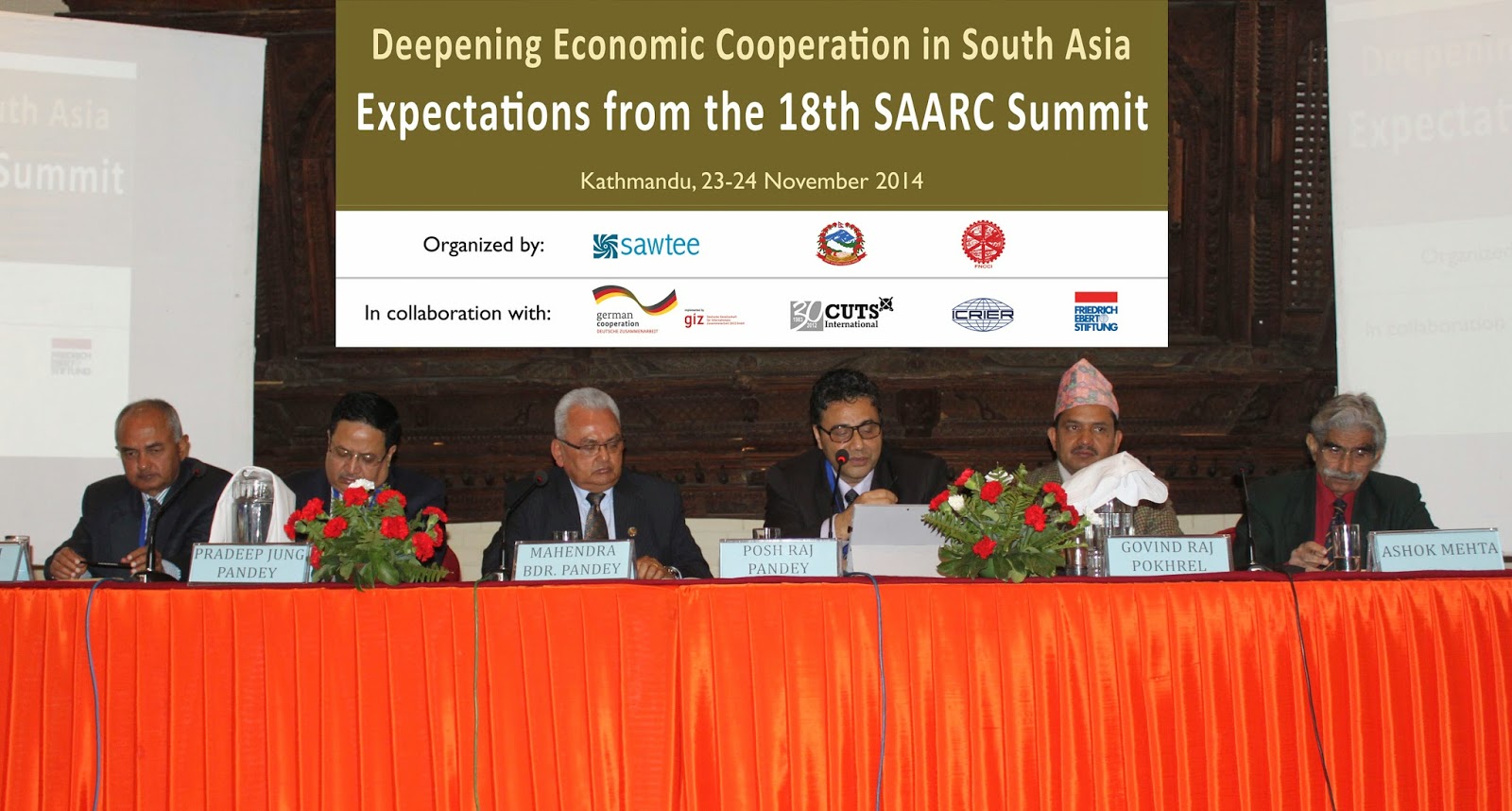 Despite huge potential, South Asia lagged behind compared to other regional groups, according to the experts.
There is immense economic potential in the region," vice chair of National Planning Commission Prof Dr Govind Raj Pokhrel said addressing a two-day regional consultation on 'Deepening Economic Cooperation in South Asia: Expectations from the 18th SAARC Summit' here in Kathmandu today.
Stressing on improving trade facilitation to boost intra-regional trade, he also highlighted on the potential of regional energy cooperation. The recent efforts of the government to promote energy cooperation with India are indication in the right direction, which could further facilitate regional energy cooperation, he added.
The programme – being organised as a side-event to the 18th SAARC Summit to provide useful recommendations to deepen economic cooperation in South Asia – was organised by South Asia Watch on Trade, Economics and Environment (SAWTEE), National Planning Commission and Federation of Nepalese Chamber of Commerce and Industry (FNCCI), in collaboration with
German Cooperation for Development (GIZ), CUTS International, India Council for Research on International Economic Relations (ICRIER), and Friedrich Eburt Stiftung.
President of FNCCI Pradeep Jung Pandey, on the occasion, provided an account of the barriers faced by the business community in conducting trade within South Asia. He also stressed the need to go beyond trade in goods and also look as how to exploit the untapped potential of the services sector.
More important he pointed out the need for greater economic as well as people-to-people connectivity in the region, and argued that normalised trade relation between India and Pakistan is necessary for South Asian Association for Regional Cooperation (SAARC) to move forward.
Inaugurating the programme, chief guest and minister of Foreign Affairs Mahendra Bahadur Pandey said that SAARC has long dreamed of deeper regional cooperation for economic growth and prosperity and has also undertaken initiatives to facilitate trade and investment, and improve regional connectivity. "However, several constraints like financial and investment-related, largely affect the efficient implementation of trade and transport facilitation measures," he added.
Expressing hope that SAARC would undertake necessary steps to promote intra-regional investments and attract foreign direct investments (FDIs), Pandey said that through the effective implementation of the SAARC Agreement on Trade in Services (SATIS), SAARC could see higher growth in the services sector.
Most countries in the region have failed to meet the Millennium Development Goals (MDGs), he said, emphasising that the SAARC Development Goals (SDG) should be aligned with the Sustainable Development Goals in line with the post-2015 development agenda.
He also highlighted the necessity to take mitigation and adaptive measures to address the threat of climate change, which is going to impact, among others, food security of the region.
Strengthening of regional cooperation on this front is essential, he said, expressing hope that the 18th SAARC Summit would be able to send across a strong message that SAARC leaders are ready to revitalise and implement all past initiatives undertaken by SAARC to deepen regional integration.
Likewise, an independent analyst from India Major General (Retd) Ashok Mehta, on the occasion, rightly highlighted the role of track-II approach in moving forward relevant issues to track-I. He spoke about the Kathmandu Declaration signed at the 3rd SAARC Summit, and how SAARC went against its original Charter to address the issue of peacekeeping, which was viewed as a security issue and was thus beyond SAARC mandate.
He also advocated for a collective regional stance on peacekeeping issues at the UN, through the formation of a regional consultative mechanism to discuss the issue at the political, academic and field level. "It would pave the way for enhanced economic cooperation," he added.
Despite the existence of SAARC, progress in deepening regional integration has been frustratingly slow and gains have only been modest, said executive chairman of SAWTEE Dr Posh Raj Pandey speaking as the chair of inaugural session.
Therefore, what is needed to move SAARC forward is political will and sincere commitments at the highest level, he said, adding that informal trade in the region being substantially higher than formal trade is testimony of policy-induced trade barriers, which need to be overcome to make SAARC a truly economically integrated region.
Importantly, he stressed the need to reinvent the regional development paradigm with inclusiveness.
Earlier, executive director of SAWTEE Dr Hiramani Ghimire welcoming the participants said that the regional consultation is an opportunity to discuss what can realistically be done to enhance economic cooperation in South Asia, and provide recommendations for the 18th SAARC Summit.
The two-day discussion will see more than 60 participants, including researchers, policy makers, private sector representatives and media from different South Asian countries are participating in the regional consultation.
They will brain-storm on issues like trade and transport facilitation, and transit; non-tariff barriers; trade, gender and technology transfer; India-Pakistan trade relations; intra-regional investment cooperation; and regional cooperation for energy security.
Posted by Kuvera Chalise at 10:13 PM

I go through your blog and it attracted me in. Your approach towards the things is quite nice. Here I am also sharing information about Casa Greens Noida Extension which is an outstanding residential project.

Thanks, those great articles are great! You’re sharing some great in progression about the real estate souk on this blog. Supertech Romano Noida

I have getting more information through your blog that’s sharing information are very good
Real Estate Developers in Bangalore
http://www.the-empyrean.in/

I really appreciate your professional approach. These are pieces of very useful information that will be of great use for me in future.

This is a very informative post. I too have something worth information about Supertech Capetown.

Hi read through this post, very informative. I also have some information about commercial place in noida supertech astralis

Nice post , I have some information about residential place in lucknow Bayaweaver Home Lucknow in Lucknow.

A good post which provides a new point of view about the Real Estate. I too have something worth sharing about supertech golf suites.

Nice article
visit
How to make money on Internet to learn and earn more money.

I ADAMS KEVIN, a representative Aiico Insurance plc, we trust and respect for individual differences in day out a loan. We will provide 2% of the loan's interest rate. If you are interested in this business contact us by e-mail: (adams.credi@gmail.com) now transfer their loan documents issued properly. Do you need a loan to set up business or school if you are very welcome to Aiico Insurance plc. You can also contact us by e-mail: (adams.credi@gmail.com). We first week can request a balance transfer.

DO YOU NEED LOAN FOR PERSONAL BUSINESS? IF YOU CONTACT YOUR EMAIL ABOVE TO PROCEED WITH YOUR LOAN TRANSFER IMMEDIATELY OK.

Nice blog ,I have some suggestion about proprperty in noida , himalaya pride noida.

Thanks for sharing good information , I have some suggestion about commercial property in noida expressway, Supertech E Square Sector 96 Noida.