The Asian Development Bank (ADB) handed over its pilot project on wind solar hybrid energy system to Alternative Energy Promotion Centre (AEPC) of the Ministry of Environment here at the Nepal Resident Mission today.
The wind-solar hybrid system was installed in Dhaubadi village of Nawalparasi district in December 2011 under ADB’s regional technical assistance for Effective Development of Distributed Small Wind Power Systems in Asian Rural Areas for which the AEPC was the implementing agency in Nepal.
The $3.8 million regional technical assistance was part of ADB’s 'Energy For All' initiative that supports increasing access to energy in remote rural areas. Along with Nepal, the regional technical assistance covers Sri Lanka, Pakistan, and the Maldives. 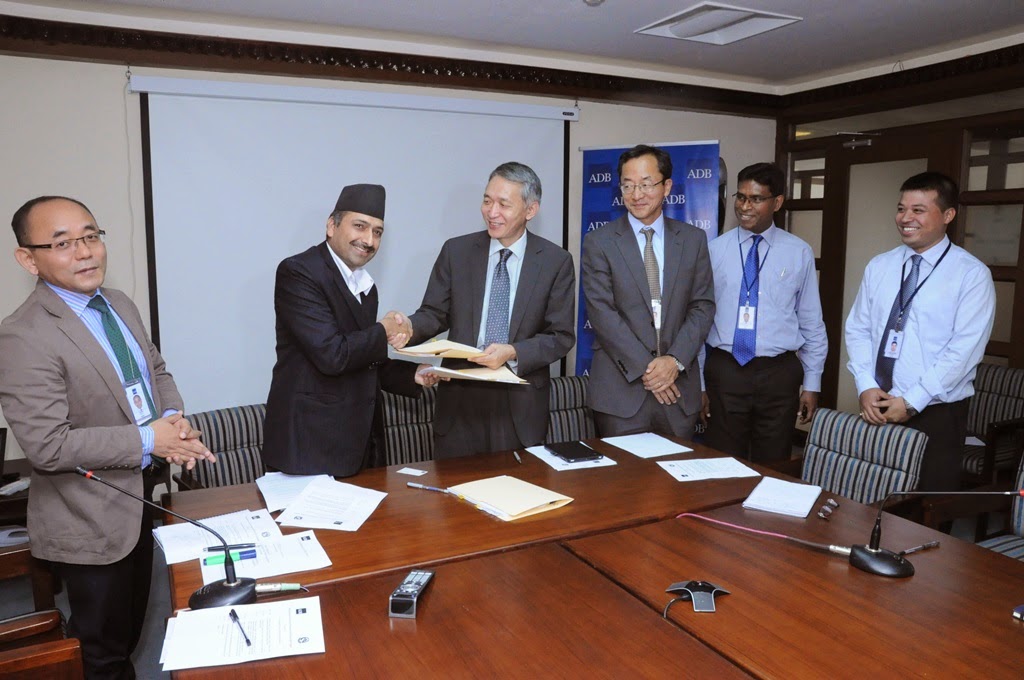 “The project is now providing electricity services to 46 rural households of Dhaubadi," said ADB’s country director for Nepal Kenichi Yokoyama, speaking at the handover event.
It was the pilot for the hybrid wind and solar system in Nepal, he said, adding that the success of this project has demonstrated that it is indeed viable to provide reliable energy access to rural Nepal through solar wind hybrid systems as one of the clean energy options.
He also said that the lessons learned from this project will be very useful in scaling up the systems across Nepal, as well as in other developing member countries of ADB.
The project is based on ‘energy systems’ planning approach and has installed two sets of 5 kW wind turbines complimented by 2 kWp of solar PV panels to satisfy the village’s electricity demand of 43.6 KWh per day.
The electricity from the mini-grid has helped the villagers in Dhaubadi save time and money spent on their search for firewood. Electricity has also eased a hard life by allowing women to cook and clean, children to study after dark and improved overall productivity of households.
Director of the Energy Division at South Asia Department ADB Yongping Zhai and acting executive director at the AEPC Ram Prasad Dhital signed the transfer document of the wind-solar hybrid system from ADB to AEPC starting June 13.
"ADB is now supporting the Nepal to scale up similar initiatives in other rural areas of the country under its proposed SASEC power system expansion project,” Zhai said, after signing the handover document.
"Under the proposed SASEC power system expansion project, the off-grid component with more than 4.0 MW of mini hydro and 500 kW mini grid based solar or solar and wind hybrid system will be added," he said, adding that it will provide access to electricity and facilitate productive energy use activities in rural locations from various sources of energy like mini hydro, wind energy, solar energy and wind solar hybrid energy systems.
Posted by Kuvera Chalise at 9:00 PM

A gauche, l'avant d'une semelle classique celle de mes Saucony en l'occurence. Benefit from policy to promote home appliances, tvibram five fingers shoes he company achieved good results in 2008, net profit of 25.679 million yuan, an increase of about 45%, indicating good growth performance. [url=http://fitflopsandal.webpaper.co/]boots fitflops[/url] There are a host of causes, I would argue, behind this trend.

A Very Good Project to Invest in.

Oh My God Retail Space Noidais one of the best places from where can easily search for a studio apartment which is designed by international architects. Find your perfect fit and feel relaxed and comfortable.

Your blog is really very nice informative and thorough. I read the blogs each time they are sent. Thanks for your contributions and taking the time to share.... keep it up

Good Project to Invest in

Find 5000 sq. ft. space for warehousing on rent in patparganj industrial area on IndustrialAreaProperties.com which provides you with the best industrial deals available in the capital in entire Delhi NCR region may it be any kind of requirements. Call 9717-1717-50 for the visit.
Commercial Office Space for Rent in Sahibabad Industrial Area

Thank you for sharing code! This can be a great help for those seeking to follow the blog. And of course we should also remember that whenever we commented it must be relevant to the topic so that it will be approved by the admin. Anyway, this is amazing! hope you can post for further technical just like this. Thanks list this blog
omr flats

Thanks for sharing the helpful information with us..Keep going
Visit http://www.mjrclique.propertytimes.org/ for more details about New residential Project Lakeside Habitat. and call 09900033755 for Booking.

The venture is highly endowed with all the exotic features that will introduce you with cosmic lifestyle. The company tends to enhance the living style of an individual with its every venture.

The venture is a place of extreme joy where you can cherish the supreme facilities of the place.

No one really considered that it was quite good to spend money on any such real estate, which hasn’t been noticed, and thus it became an issue. So, when the Supertech
noticed this it became quite important that there is going to be a serious dip in the residence costs as the financial commitment was limited.
Supertech golf Suites Noida

Thanks
you have shared a informative post. i am glad that you have shared that post. i hope you will shared more posts again.
WTC Manesar Signature Tower is full of world class amenities and this is one of the most demanding project.

Hi this is the Pretty Good Information Regarding this topic its helps me better and I also like your all post which helps me even more better.
I Also Have Some Information for you Hope you like it and it also helps you to do more better, if you interested in prop then go with Flats In Noida

Thanx frnd your blog about information for business and good.
I Also Have Some Information for you Hope you like it and it also helps you to do more better, if you interested in prop then go with Flats In Bangalore

Business Informaiotn great and nice your good blog.
I Also Have Some Information for you Hope you like it and it also helps you to do more better, if you interested in prop then go Real Estate Lucknow we have many options for you so just contact us and grab a deal.

Hi frnd your information is a good developer and developing some good projects in Real Estate Field which is one of the fastest growing city. Here you can find a dream home for you. Romano Supertech Supertech Group has brought a new project in Sector 18 Noida. Supertech Romano Roman-themed project which is very beautiful and will make you feel like living in Rome in this facility is available to all of these projects is a good location. Supertech Romano


Supertech aims to grant you an exotic lifestyle that can bring tremendous changes in your life. With the lush green environs you can charm your soul and get relaxed on the lap of Mother Nature.Supertech Eco Village

Your blog is really worth to appreciate. I also have one commercial project in Sector 37 D Gurgaon
If you want to konow about the details just click on the mentioned link inthe comment.