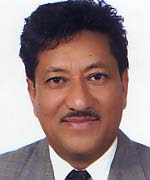 Chief executive officer (CEO) of Nepal Tourism Board (NTB) Prachanda Man Shrestha retired from today.
Shrestha served four year as the CEO of the board. He has also assured to remain active for the promotion and preservation of tourism sector. Shrestha was appointed as NTB CEO on November 1, 2007.
Before joining NTB, he served as the joint secretary at the Ministry of Industry, Commerce and Supplies as the chief of World Trade Organisation Division.
He had also served Ministry of Tourism as acting DG of Tourism Department before it dissolved in 1998.
Posted by Kuvera Chalise at 10:53 PM

I've been exploring for a bit for any high quality articles or weblog posts in this sort of space . Exploring in Yahoo I ultimately stumbled upon this website. Reading this info So i am satisfied to express that I've a very good uncanny feeling I came upon just what I needed.
I most for sure will make certain to don?t put out of your
mind this web site and provides it a glance regularly.

Hey there! Do you use Twitter? I'd like to follow you if that would be okay. I'm absolutely enjoying your
blog and look forward to new updates.

Hi mates, nice post and good urging commented here, I am really enjoying by these.