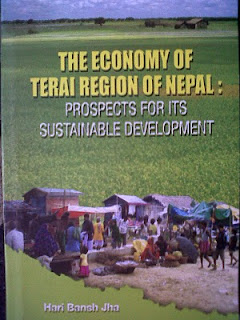 Dr Hari Bansh Jha, Professor of Economics and Executive Director of Centre for Economic and Technical Studies (CETS) has authored 'The Economy of Terai Region of Nepal: Prospects for its Sustainable Development.'
In the six chapters the author has tried to explore the challenges and opportunities in the Terai region, apart from cross border relations and federalism. Terai stretches from the international border with India in the Far-Western to the Eastern Region, and is the most productive region in Nepal. Though, agriculture is the main economic stake of the region, it is also the major industrial zone. From agro-based industries like jute factories, sugar mills, rice mills and tobacco factories to multinational companies are prefer Terai.
"But lack of infrastructure has pulled the industrialization process backward in the Terai region, though the first industry was established in the region," he writes.
The government apathy and the mushrooming armed outfit in the name of liberation of Terai, the region, once most preferred industrial location, has become a terror zone hurting the overall economic growth of the country.
The Southern plains – popularly known as Terai and dubbed also as a food bowl of the nation – could not keep up with the development pace despite huge resources and opportunities.
The failure to recognise the Terai as the engine of economic growth and the lack of initiatives to develop the region are the key factors for the set back of the Nepali economy, according to the book that has also presented the checklist of all infrastructures like governance, education, health, irrigation, electricity, roadways, airways and communication of Terai.
Once fertile land, the Terai has turned into a barren land due to drought and flood, leading to the fall in land productivity. "As a result, different Terai districts have now turned into food deficit zones," Jha writes.Many of the industries in the Terai region have closed because of growing labour problems, bandhs, security problem fuelling the unemployment to its peak.
The author has written that over two-thirds of population of the Terai region, known as Madhesis, is victims of social and economic exclusion, but he has not mentioned that the Madhesi leaders, who claim themselves the messiah of Terai are equally responsible to the region's poverty.
The author rightly writes that the natural resources of the region are not properly harnessed to the people's advantage. "Poverty is rampant. Despite the prospects of higher Internal Rate of Return (IRR) in investment in development sectors, the government and many of the donor agencies, including the World Bank, have least interest in the development of the region. Even the role of INGOs in the Terai is questionable," he writes.
State restructuring is the demand of the time and it could help develop the region. But sustainable development will still be a far cry in case of a single state in the Terai. The author has not analysed in the book why and how should 'One Madhesh One Pradesh' be the mantra for Terai development that could uplift of the socio-economic condition of larger mass in Terai, who are being used as a steping stone to the power by the Terai leaders.Terai is still the engine of economic growth of the country, provided the security. As he writes, once a free trade arrangement regime with the provision of common custom union with India is established, the Terai economy will take-off as 360 million populations in the border states in India is a bright prospect for the growth of export processing zones (EPZs) in the Terai region. "These EPZs could target the Indian border states that has more population than Europe."
The Terai region could also capitalise on foreign investment, particularly investment from India but the author forgot that the investors will not invest in crime and violence prone region.
Unless the Terai political parties have a clear vision of development of Terai, it’s not going happen any time soon.
Had the book covered the harsh reality of the Terai politics, the book would have been a complete in its aim. Unfortunately, it looks like that the political leaders of the Terai are least concerned about the people's sufferings and their cause. What they are interested in is to indulge in their power game to serve their vested interests, not to develop the Terai and country as a whole.

Whether you are searching for specialty styling products or specific
Loreal hair products, you are sure to find what you need.
My hair doesn't always look good when I'm going to attend openings and red carpet events.
A well groomed woman will look to her hair and makeup first and a poll of 3,000 females
across the UK revealed that about 44% feel attractive if they are having a good hair day, this compares to 16% who felt pleased with their
appearance if good teeth gave them that winning smile.

Usually sales arе advantageous to customers because thеy can рurchase items at a mагk down pricе.