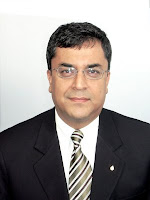 Radhesh Pant, managing director, Bank of Kathmandu (BoK), has been ‘called back’ from the post of managing director by the majority of the Board of Director, yesterday.
Sanjay Bahadur Shah, chairman of the Board, dubbed the action as a strategic initiative of the bank while looking into the future. Significantly, it has a bearing on the global economic meltdown and its impact on the nation's banking sector.
"I was taken aback by the move," a surprised Pant said.
A source, close to him, maintained that he was asked to step down last week. "He, however, turned down the proposal. He insisted that he did nothing wrong to warrant such a move," added the source.
In the latest realignment of head honchos, BoK has elevated Sabin Raj Shrestha as officiating Chief Executive Officer (CEO). Earlier, he was Chief Business Officer.
"We have formed a sub-committee to recommend an independent professional CEO at the earliest," added the chairman. He elaborated on the unprecedented move.
A majority of BoK's shares are with the public. Only 42 per cent is with the promoters, making it the only private bank in the country, which has 58 per cent public shareholders.
According to Shah, the Board felt that a professional CEO – instead of a promoter -- would be best primed for chalking out future initiatives and strategies. This will be devoid of "any promoter, investor or owner group bias".
"However, Pant -- who has 10 per cent shares -- will continue as a director in the Board. The decision has nothing to do with his perceived non-performance," added Shah.
Pant served as the MD for seven years in BoK. He turned around the financial institution into a profitable venture. At present, its shares are trading at Rs 1400. It was Rs 200 when he assumed charge.
"In retrospect, he was apt in light of the bank's financial health. He did a commendable job. But, times have changed. Hence, the Board feels an independent professional CEO is better suited for the top job," reasoned Shah.
The 313th Board meeting yesterday took the decision by majority to ‘call back’ Pant from the post of MD and scrapped the post as well . Four directors, two each from promoters and public, upheld the decision. The remaining duo did not oppose the move. There are only seven members -- including Pant -- in the Board at present after one public director resigned.
Posted by Kuvera Chalise at 11:07 PM

Sanjay Shah is a Sicko. Can't do anything himself and is jealous when others do well. Keep it up Sanjay, the typical 'Monkey'.